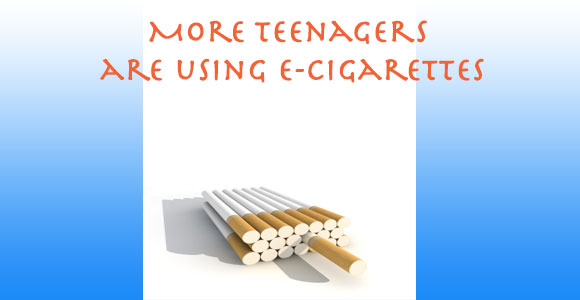 What are electronic cigarettes?

Electronic cigarettes (e-cigarettes) are battery operated devices that are designed to look and feel like regular cigarettes.

Electronic cigarettes have gained high popularity in the past few years in both adults and in young adults. According to a study done by the Centers of Disease Control and Prevention (CDC), 21% of adults who smoke traditional cigarettes had used electronic cigarettes which increased from approximately 10% in 2010. Also, the percentage of US middle and high school students who use them has more than doubled from 2011 to 2012 (increased from 4.7% to 10%). In total, more than 1.78 million middle and high school students nationwide had tried e-cigarettes in 2012. This number is only estimated to grow more in the next few years.

What is in an E-Cigarette?

The devices contain cartridges filled with nicotine, flavors (such as chocolate, strawberry, caramel, bubblegum, and mint), and other harmful chemicals. For instance, the FDA found a toxic chemical that is used in antifreeze called diethylene glycol when they analyzed the contents of the cartridges from two popular brands. There were also other samples that were found to contain a substance that can cause cancer known as carcinogens. However, these devices do not contain any tobacco.

There is an atomizer which heats a cartridge that is filled with liquid containing nicotine. This causes the nicotine to turn into a vapor which can be inhaled and resembles a cigarette smoke except there is no smell or smoke. They are battery operated and do not require a lighter, which makes it more convenient for consumers.

What are some claims made by E-Cigarette manufacturers?

Manufacturers of electric cigarettes claim that they are a healthier alternative to regular tobacco smoking since there is no inhalation of harmful tobacco smoke which contains thousands of toxic chemicals. They also claim that is a safer for the environment and others since it does not produce “secondhand smoke”. Some also claim that they may help with smoking cessation and may be used as an alternative for nicotine replacement therapy.

What are some of the FDA’s concerns?

One of the biggest concerns with electric cigarettes is that they are sold without any legal age restrictions and comes in a variety of different flavors that may appeal to the younger generation. Additionally, these are sold without any health warnings and are often sold in malls and online which makes them easily accessible to everyone. Therefore, the FDA is worried that it can cause an increase in nicotine addiction in the younger generation and may lead them to try other tobacco products such as conventional cigarettes.

In addition, electric cigarettes may contain ingredients that are not safe for human use. Since there are no clinical studies submitted to the FDA about its safety and efficacy for its intended use, consumers cannot know for sure whether they are safe for their intended use and what types of harmful ingredients are contained in each electric cigarette. Consumers have no way of knowing the exact amount of nicotine and other harmful chemicals they are inhaling with each cigarette.

What are the risks?

In a recent study conducted in the Journal of Substance Abuse: research and treatment, 111 participants substituted conventional cigarettes for electronic cigarettes for at least one month.  Some common side effects that they experiences were throat irritation, cough, stomach pains, and palpitations. These side effects were generally mild and most resolved after continued use. Other less common side effects were headaches, sleepiness or sleeplessness, chest pain, and gum and nose bleeding. Forty-two percent of participants quit smoking of regular cigarettes during the first month while 16.2% increased the initial nicotine levels to achieve complete smoking abstinence. 64.9% of participants reported reducing the nicotine concentration after about 8 months of using the electronic cigarettes. However, it is important to note that only a small percentage (12%) started with a low nicotine concentration of less than 5mg/mL, while the majority started with greater than 15 mg/ml. Also, this study was conducted for a short period of time. Therefore, it is difficult to determine the exact smoking cessation effect and how long participants may remain in abstinence.

Overall, there is still a need for more clinical studies to be done on larger populations over a longer period of time in order to accurately determine the risks. We do not know all of the risks and potential harms that may come from the use of electronic cigarettes. In addition, we still do not have enough information on the potential harm to others. Even though there is no “secondhand smoke” there is still the production of vapor that may be inhaled by others. However, despite all of this, we do know that nicotine usage is not completely harmless and has a list of side effects along with being associated with anxiety. Therefore, it is important to assess both the risks and benefits of electronic cigarettes before making the decision to purchase these devices.

Where can I report adverse effects with electronic cigarettes?

Please report any adverse events to the FDA by either

Where can I find more information on how to safely quit smoking?

Centers for Disease Control and Prevention. (2013). About one in five U.S. adult cigarette smokers have tried an electronic cigarette.

Centers for Disease Control and Prevention. (2013). E-cigarette use more than doubles among U.S. middle and high school students from 2011-2012.

Farsalinos KE, et al. Evaluating nicotine levels selection and patterns of electronic cigarette use in a group of "vapers" who had achieved complete substitution of smoking. Substance Abuse. 2013 Sep 3;7:139-46.

U. S. Food and Drug Administration/Center for Drug Evaluation and Research. (2013). Regulation of E-Cigarettes and Other Tobacco Products.