Thinking like a clinical pharmacist is similar to a CSI agent, breaking down a crime scene. Obviously, this is not a crime scene-it is a patient, who is critically ill from an unknown cause. What makes it worse is that treatment is also unknown. The following is an intriguing case. What would you do if you were the pharmacist? 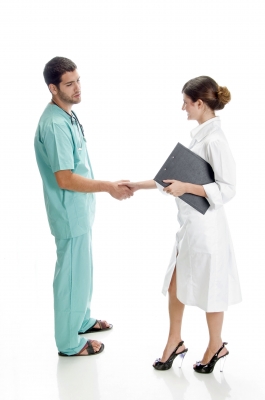 A 55-year old female is admitted to the hospital with 3 episodes of hematemesis. She is brought in by ambulance from a nursing home. Prior to this admission, she presented to another hospital with the same symptoms a few weeks ago. A recent Esophagogastroduodenoscopy (EGD) revealed non-cancerous lesions. Her past medical history includes recent GI bleed of non-specified origin, arthritis, bipolar disorder, cerebral palsy, urinary incontinence, and hypothyroidism. She has a history of alcohol abuse and has been sober for 2 years. Her medications at the skilled nursing facility (SNF) include oxycodone SR 40 mg BID, quetiapine (Seroquel) 200 mg QHS, citalopram (Celexa) 20 mg BID, clonazepam 1 mg QID, gabapentin 400 mg QID, levothyroxine 100 mcg daily, oxybutynin 10 mg QHS, and diphenhydramine 25 mg QHS.

In the ER, the physician gives her atropine 0.5 mg IV to reverse the bradycardia. She is transferred to the medical ward for further work-up. The medical team suspects the patient has cirrhosis secondary to the history of alcohol abuse. Cirrhosis can lead to esophageal varices, which may be the cause of the hematemesis. A liver ultrasound and EGD are ordered.

As a clinical pharmacist, what is your role in this case? Obviously, the pharmacist cannot prescribe or perform the EGD. However, we are the medication experts. Unbeknownst to many physicians, there is a medication on her list that can increase her risk of hematemesis.

According to the history and physical, her husband passed away two months ago. Her physician prescribed the antidepressant, Celexa. Since Celexa may have contributed to her risk of GI bleeding, it will be prudent to switch to a different antidepressant. Which alternative antidepressant can you recommend?

Generally, antidepressants are equally effective. Selection of an agent is based on their side effect profile, convenient dosing, drug interactions, and affordable cost. In the family of antidepressants, there are SSRIs, SNRIs, tricyclic antidepressants (TCAs), atypical agents, and MAO-inhibitors to select from.

It is not recommended to switch to another SSRI for this patient.

In 2007, a post-marketing review was conducted on duloxetine (Cymbalta) by the Office of Surveillance and Epidemiology (OSE). According to the review, there were 170 cases of bleeding associated with duloxetine. Majority of them were related to GI bleeding. The OSE recommended that physicians be cautious about prescribing drugs known to inhibit serotonin such as aspirin, NSAIDs, anticoagulants, SSRI, and SNRI in patients of advanced age or with coagulopathies, and patients taking drugs known to inhibit hemostasis. Since our patient has an elevated INR of 1.6, it is not recommended to switch to a selective-serotonin-norepinephrine reuptake inhibitor (SNRI).

Bupropion (Wellbutrin) is an excellent choice; it is available in the generic form and can be dosed daily using Wellbutrin XL. Mirtazapine (Remeron) is dosed nightly secondary to its sedative effects. The sedation can alleviate the patient’s insomnia and the patient’s use of diphenhydramine can be stopped. Trazodone is not a good option. To treat depression, trazodone is dosed twice or three times a day and is also highly sedating.

These medications are rarely ordered secondary to their plethora of drug and food interactions and side effects. MAO-inhibitors block monoamine oxidase. There are two types of monoamine oxidase, MAO-A and MAO-B. Hypertensive crisis can occur in patients who take MAO-inhibitors that block MAO-A in the gut and consume foods high in tyramine. Tyramine-rich foods are “aged” such as cheese and certain types of meat.

Also Read: Treatment of Depression with Medications and Psychotherapy

You call the attending physician and discuss your findings. It’s important that you don’t infer that the antidepressant causes the GI bleeding. However, you can point out that Celexa can increase the risk of GI bleeding in this patient. Since starting Celexa, she has had two hospital admissions of hematemesis. It will be wise to switch to another antidepressant (Wellbutrin XL daily or Mirtazapine nightly), or to add a proton-pump inhibitor with Celexa.

The EGD shows an ulcer with a clean base. The liver ultrasound reveals gallstones. Other than the patient’s INR of 1.6, there is no other evidence of liver failure. The patient is discharged back to the nursing home with her previous medications except with the addition of Protonix 40 mg daily. Celexa is held. She is to follow-up with her primary physician.

Practice Guideline for the Treatment of Patients with Major Depressive Disorder

Add your expertise by joining and commenting or publishing an article.