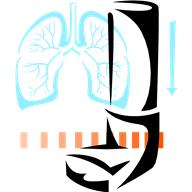 The Global Initiative for Chronic Obstructive Lung Disease (GOLD) and the World Health Organization (WHO) defines COPD as a common preventable and treatable disease characterized by airflow limitation. It is usually progressive and associated with an enhanced chronic inflammatory response in the airways and lungs from noxious particles or gases.

What are the primary cause and drug therapies for COPD?

The primary cause of COPD is cigarette smoking. Therefore, smoking cessation is the only management strategy proven to slow progression of COPD. However, drug therapies are commonly used to help with the symptoms and exacerbations of COPD.

Bronchodilators represent the mainstay of drug therapy for COPD. They are used to help relieve patient symptoms and improve quality of life. The use of short-acting bronchodilators such as albuterol (Proair HFA, Proventil HFA, Ventolin HFA), levalbuterol (Xopenex HFA), pirbuterol (Maxair Autoinhaler) is recommended for initial therapy in patients with mild or intermittent symptoms.

Which inhalers used for the treatments of COPD are being discontinued, and why?

Combivent Inhalation Aerosol (albuterol/ipratropium) and Maxair (pirbuterol) inhalers are being discontinued because they contain chlorofluorocarbons (CFC). Chlorofluorocarbons are propellants that disperse inhaled medicines out of the inhaler so patients can breathe the medicine into their lungs. Unfortunately, CFCs harm the environment because they decrease the protective ozone layer above the Earth. Therefore, the United States and other participating countries banned the sale of substances that decrease the ozone layer, including CFCs.

When are the inhalers being discontinued? What are some alternatives?

The manufacturer of Combivent, Boehringer Ingelheim Pharmaceuticals discontinued Combivent Inhalation Aerosol in July 2013. All patients were advised to switch to Combivent Respimat, which delivers the same medication without the use of a propellant because it uses a spring mechanism instead.

Maxair (pirbuterol) is the last inhaler to be discontinued with a scheduled discontinuation date of December 31, 2013. The manufacture will not make a different formulation of this medication. Therefore, since pirbuterol is a short-acting beta-2-agonist (SABA), alternative medications are other SABA medications such as albuterol HFA (hydrofluoroalkanes) inhalers (Proair, Proventil, or Ventolin).

What is the difference between discontinued Combivent and the new Combivent Respimat?

Although, both the new and old formulations contain the same active medication (albuterol and ipratropium), the amount of drug delivered with each puff is different. Therefore, the recommended dose for COPD has changed from two inhalations 4 times daily to one inhalation 4 times a day. In addition to a decrease in the number of inhalation, Combivent Respimat also does not require any shaking or the need for a spacer. In addition, unlike the old formulation people with soy or peanut allergies can use the new formulation.