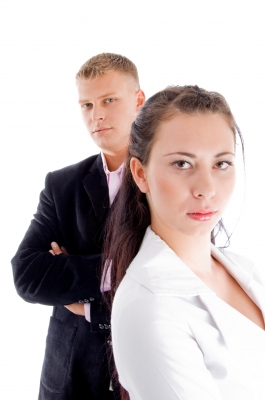 What Would You Do | How to Manage Inappropriate Work Conduct

You are the hospital preceptor of a beautiful 24-year old Asian pharmacy intern. She is staying with you for 6 weeks for her required hospital rotation. She is a good student; studies, prepares, and checks on her patients daily. One day, she stops reporting on her patients on 2-West. She replies that she was too busy in the morning. She promises to do it tomorrow. However, the next day, she does not check on her patients in the same wing. She is now quiet and timid, different from her normal gregarious nature. Later that day, a medical resident approaches you with disturbing news. A male nurse on 2-West was flirting with the intern and even asked her out. She said no, but the nurse continued to pursue her.

You confront the pharmacy intern and she begs you not to intervene. She also asks that another intern monitor her 2-West patients.

What is the best approach to this situation

Flirting, asking her out on a date, but she says no, and yet he continues to pursue her. All signs point to sexual harassment. That sounds a little harsh but there are two types of sexual harassment: quid pro quo (if you do this for me, then I'll do this for you) and a hostile environment (sexual jokes, unwanted advances, or even overhearing someone tell a sexual joke).

Harassment can come in a verbal, physical, written or nonverbal form. Verbal forms are jokes, comments that might cause an individual to feel uncomfortable, asking for sexual favors, or repeatedly asking a person out. Physical forms include inappropriate touching and assault. Nonverbal harassment may compromise of staring inappropriately or displaying derogatory gestures. Written harassment is when the insult is on print such as posters, emails, and photos.

In order to classify an incidence as sexual harassment, the incidence should be persistent (occurring more than once and despite warnings to the offender). The obvious exceptions are rape or sexual assault which are considered sexual harassment and punishable by law. If an individual was asked out on a date once, then it would not be classified as harassment. However, if the request was made repeatedly or the offender created an uncomfortable environment for the victim, then the situation would be considered harassment.

In this case, the intern stated she did not want to go on a date with the nurse and yet he continued to pursue her, the male nurse can be charged with sexual harassment. In this situation, what you can do as the victim is to keep records of when (date and time) these incidences happened and a narrative of the events. Allow witnesses to come forward and write down what they may have heard or seen. Inform the harasser of the offense, including a firm answer of refusal. Notify your employer so that they can take the necessary steps to protect you. It is their duty. In addition, report your employer in writing. By doing so, you will have a record of when you reported to them and what information was provided. Other options include filing a claim with the federal Equal Employment Opportunity Commission (EEOC) and/or your states’ fair employment agency or filing a lawsuit. It is important to keep records of everything involving the situation.

About the Authors and Series

What Would You Do is a weekly column highlighting real life cases involving pharmacist-related work conflicts. Authors include Karine Wong, Pharm. D. and Lois Bui, Pharm. D. Karine has a 10 year history of working in hospital management, and 2 years as a graveyard hospital pharmacist and outpatient pharmacist. Lois has an extensive history working in HR management prior to her pharmacy career.