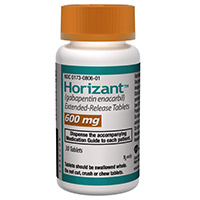 What is Horizant and its mechanism of action?

Horizant is a prodrug that contains gabapentin enacarbil  which has to be converted into gabapentin in the body before it can have its effects. The exact mechanism of action of gabapentin in the treatment of restless legs syndrome and postherpetic neuralgia (nerve pain due to damage from herpes zoster or shingles) is unknown. Gabapentin prevents pain response in laboratory models for pain. Gabapentin's structure is very similar to a neurotransmitter (a chemical used to transmit signals in brain cells) called gamma-aminobutyric acid (GABA). GABA reduces the transmission of nerve impulses and calms excitable nerve cells in the nervous system.

What is Horizant used for treating?

Horizant is a medication approved for treatment of restless legs syndrome (RLS) and management of postherpetic neuralgia (nerve pain due to damage from herpes zoster, also known as shingles)

How effective is Horizant?

In a 12-week study of patients with postherpetic neuralgia (PHN) treatment with Horizant reduced pain and increased the proportion of patients who reported at least 50% reduction in pain.

What are side effects of Horizant?

Some side effects include:

What is the dosage of Horizant?

Horizant is available in 300 mg and 600 mg extended-release tablets. For the treatment of restless legs syndrome the recommended dosage is 600 mg once daily with food at about 5PM.

For postherpetic neuralgia, the recommended dosage is 600 mg once in the morning with food for 3 days, then increased to 600 mg twice daily. Horizant should be taken as a whole tablet. Do not cut, crush, or chew the tablets.

The maximum dose of Horizant is 1200 mg daily. Larger doses do not provide additional benefit for RLS or PHN but cause more side effects.

What are Horizant drug interactions?

In clinical trials, Horizant was tested with cimetidine and naproxen. There were no significant changes in Horizant blood levels.  Combining morphine with Horizant caused more sedation, dizziness, and nausea than either drug alone. Orlistat can decrease the effectiveness of gabapentin.

Alcohol  consumption while taking Horizant is not recommended because it may increase the release of Horizant in the body, increasing the risk of adverse effects.

What are warnings and precaution for Horizant?

Pregnancy: Horizant is pregnancy category C which means it has not been adequately evaluated in pregnant women. Horizant should only be used in pregnancy if the potential benefits outweighs the risk to the fetus.

Nursing Mothers: Gabapentin is excreted in human milk. Since there is potential for adverse reactions in nursing infants, mothers should either discontinue nursing or discontinue Horizant.