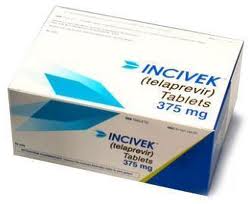 Incivek is a protease inhibitor used for treating chronic hepatitis C virus (HCV) infections. It is a direct acting antiviral agent. Incivek reduces the activity of hepatitis C virus protease enzymes which leads to the formation of defective viruses that are unable to multiply in the liver. As a result the hepatitis C viral load decreases.

What is Incivek used for

Incivek is used for treatment of chronic hepatitis C infection in adults with compensated liver disease, including cirrhosis. Patients may be treatment naive (previously untreated) or have been previously treated and were none responders, partial responders, or relapsed. It must be combined with peginterferon alfa and ribavirin.

How well does Incivek work

The efficacy and safety was evaluated in 4 clinical studies. Studies compared the addition of Incivek (2250 mg total daily) or placebo for 8/12 weeks to standard therapy with peginterferon alfa-2a (Peg-IFNa, 180 mcg/week) plus ribavirin (RBV, 1000/1200 mg/day) for 24/48 weeks.

How is Incivek different from peginterferon alfa and ribavarin

What is the dosing of Incivek

It is supplied as Incivek 375 mg tablets. Dosing is 1125 mg administered orally 2 times daily (10-14 hours apart) with a meal or snack. It is administered in combination with peginterferon alfa and ribavirin.

What are the side effects of Incivek

Incivek interacts with various drugs. Here are some of the significant interactions.

These drugs decrease the breakdown of Incivek in the liver, increasing blood levels of Incivek

Antifungals (ketoconazole, itraconazole, posaconazole, voriconazole): Oral or intravenous administration of some antifungals may increase blood levels of Incivek and the antifungal. High doses of interacting antifungals are not recommended.

These drugs decrease the breakdown of Incivek in the liver

Benzodiazepines: exposure to midazolam may be increased. Co-administration of oral midazolam is contraindicated

Corticosteroids (prednisone, methylprednisolone, fluticasone, budesonide): blood concentrations of corticosteroids given by mouth or injection can be significantly increased. Alternatives should be considered.

HMG-CoA Reductase Inhibitors ― Statins (atorvastatin, lovastatin, simvastatin): blood concentrations of these agents may be markedly increased through inhibition of metabolism by Incivek. such combinations should be avoided.

PDE5 Inhibitors (Viagra, Cialis, Levitra): blood concentrations of PDE5 inhibitors may be increased when combined with Incivek. Co-administration of these agents with Incivek in the treatment of pulmonary arterial hypertension is contraindicated.

What is the price of Incivek

How to obtain prescription assistance for Incivek

Use these resources for Incivek cost assistance.