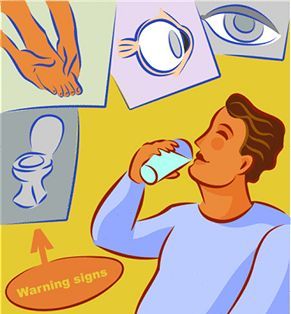 Diabetes is a chronic disease associated with high blood sugar (hyperglycemia). Type 1 diabetes is more common in children; type 2 diabetes primarily affects adults and obese children. Diabetes is a major risk factor for heart diseases. If left untreated, patients may develop complications such as kidney disease, high blood pressure, stroke, or amputations. In 2012, approximately 29.1 million Americans (9.3% of the population) had diabetes. Diabetes was the seventh leading cause of death in 2010. It is important to recognize the symptoms of high blood sugar for early detection and better management of diabetes. Here are risk factors for diabetes and 9 common diabetes symptoms.

These are two major signs of hyperglycemia and they are closely related. High blood sugar (glucose) forces the kidneys to work harder and remove the extra sugar. As sugar is filtered into urine extra fluids will be removed along with it resulting in frequent urination and dehydration. Patients will pass more than 3 liters of urine per day compared to the normal output of 1-2 liters. Consequently, patients will feel persistent thirst and will drink more liquids to quench their thirst. As patients drink more, they will have a stronger urge to urinate and the cycle continues.

Insulin is a pancreatic hormone that converts glucose from food into energy. Diabetics either lack insulin or have insulin resistance and cannot effectively get energy from eating. In addition, excessive sugar which is a source of energy is lost in urine. The lack of energy causes an increase in appetite, however, eating will not fully get rid of the hunger until the lack of insulin or insulin resistance is addressed.

Diabetics are in a state of “starvation” despite their increased appetite, due to low insulin levels or insulin resistance. Therefore, diabetics have low energy experience exhaustion that doesn’t disappear with rest or sleep.