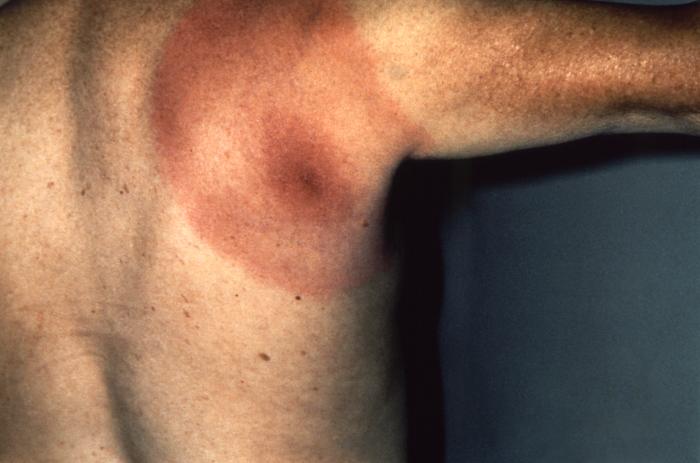 Early localized disease causes erythema migrans (EM) and nonspecific symptoms that resemble a flu or virus infections. Erythema migrans is a rash or skin lesion developed at the site of the tick bite, usually within 7 to 14 days after the bite. EM occurs in approximately 70 to 80% of infected persons.

Nonspecific symptoms of Lyme disease include:

Late Lyme disease occurs months to a few years after the initial infection. Late Lyme disease is associated with arthritis involving with one or more joints, usually at the knees. Approximately 60% of patients develop swelling and painful joints months after the initial infection. A mild neurologic complication called Lyme encephalopathy has been reported in patients with late Lyme disease. The symptoms of Lyme encephalopathy include memory loss, sleep disturbance, fatigue, and depression.

Antibiotics are recommended for patients with Lyme disease. The antibiotics recommended by the Infectious Diseases Society of America include:

Doxycycline, amoxicillin and cefuroxime axetil are oral antibiotics recommended for treatment of early localized or early disseminated Lyme disease. Doxcycline and ceftriaxone are recommended for infected patients with neurologic complications. Ceftriaxone is only available as an intravenous (IV) injection and is for more serious cases.

The duration of treatment varies for different stages of the disease. The treatment duration is 10 to 21 days, depending on choice of antibiotics, for people diagnosed with early localized disease. Patients with early disseminated disease and late Lyme disease may require higher doses and longer duration (up to 28 days) of treatment.

There is no vaccine for Lyme disease. According to the Infectious Diseases Society of America the best prevention is to avoid tick-infested areas. People who cannot avoid tick-infested areas should wear protective clothing such as long-sleeved shirt and long pants, and use tick and insect repellent that contain N,N-diethyl-3-methylbenzamide (DEET).