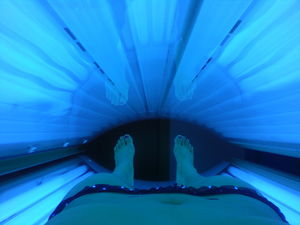 Formed from the basal (bottom) layer of the epidermis, basal cell carcinoma is the most common type of skin cancer, and fortunately, rarely spreads to other parts of the body. It can cause damage to surrounding areas, however, making it important to remove it as early as possible. This type of skin cancer doesn’t grow inside of existing moles like melanoma, and will instead look like a patch of dry, red, scaly or crusty skin. Basal cell carcinoma may also present as a shiny bump or flesh-colored mole with light pigment.

Because of the varied ways this type of cancer can look, it’s important to remember that if anything forms on the skin and doesn’t heal, have it checked out.

When caught early, basal cell carcinomas will be confirmed through biopsy, and may be removed via cryosurgery during a quick office visit. If they are larger or deeper, they may need to be excised from the skin until all cancerous layers are eliminated.

This type of cancer will often be larger than basal cell carcinoma, darker in color, have a bump under the skin, or domed, wart-like appearance. The edges of a squamous cell carcinoma will be irregular and may ulcerate to bleed or form a crust.

Because they arise from the top layer of cells, these skin cancers are often noticed more quickly than others, which is good because they can spread to organs if untreated.

Squamous cell carcinoma is generally cut out and stitched up in-office like larger basal cell carcinomas, and some doctors will use desiccation during surgery, applying an electric current to kill cancer cells and lessen bleeding.