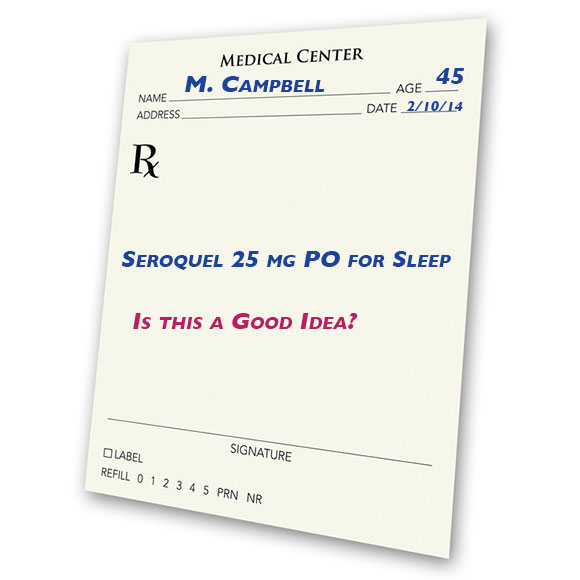 OFF-LABEL USE OF SEROQUEL (QUETIAPINE) FOR SLEEP

The FDA approved Seroquel in 1997 as a 2nd generation antipsychotic or atypical antipsychotic. In December 2009, it gained approval as an add-on for Major Depressive Disorder. Since then some prescribers have fallen in love with Seroquel. This could be because it is among the few antipsychotics that are FDA approved for multiple psychiatric indications. Seroquel has the following approved uses:

This medication is very sedating and the manufacturers recommends it should be taken at bedtime. And unfortunately some prescribers are prescribing it as a sedative/hypnotic. And boldly enough some prescribers indicate on their prescriptions  “Seroquel as needed for sleep”. This presented a unique opportunity to address the off-label use of Seroquel for sleep in an acute setting. Coe and Hong explored this topic in 2012 and discovered 2 prospective and 2 retrospective trials on the safety profile of Seroquel for insomnia.  They concluded “there are potential safety concerns with Seroquel use for insomnia."  They also suggested further evaluation of off-label use of Seroquel for sleep.

This study was a 6-month retrospective medical chart review. The study was limited to an acute in-patient clinic. Participants should have had orders for Seroquel in the past 6 months, regardless of the dose. 50 charts were randomly selected and reviewed.

The main reason behind this study was to determine the frequency of Seroquel off-label use for sleep. 32% is a very high percentage for an off-label indication. A chi-square analysis on the findings also revealed that a prescriber was as likely to prescribe Seroquel for sleep as they would for it approved FDA indication. These findings may come as a surprise to some clinicians considering the numerous side effects of 2nd generation antipsychotics. The side effects of Seroquel may not be apparent in an acute care setting but long-term side effects are inevitable. This study did not look into how many patients were discharged on Seroquel for sleep. Also, the main focus was on Seroquel, and its indication for sleep. This was mainly determined by Pharmacy orders that stated “ Seroquel as needed for sleep”. Patients admitted to the facility have other psychiatric disorder other than sleep. However, a tally of how many had which specific disease was not determined.

Seroquel is increasingly being used for sleep, despite the availability of safer sedative /hypnotics in the market. For starters, Seroquel has a huge black box warning:

These warnings are not only on Seroquel, but are on all similar drugs. Side effect of Seroquel includes, weight gain, increase cholesterol, and increase appetite, dizziness, somnolence, agitation, fatigue, and extra-pyramidal symptoms. Some serious side effects that have been reported with Seroquel include sudden cardiac death, diabetic ketoacidosis, pancreatitis, agranulocytosis, tardive dyskinesia and seizures.

The benefit of “sleep” from Seroquel does not outweigh the numerous side effects. All drugs have side effects but there are safer sleep-aid options than Seroquel. Prescribers should only use the right medication for the right indications. Patients on the other hand, should be well informed on all medications they take. Prescribers should reserve these medications for appropriate indications where the benefit outweighs the risk.

Thank you to Micki Soehn PharmD for coming up with the project topic and being the main preceptor in charge of this project. Thank you to John Inciardi PharmD, DSc for analyzing the data.