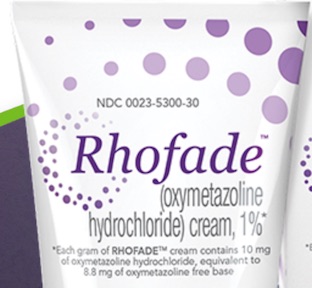 What is Rhofade and how does it work?

Rhofade is a topical cream for treating adults with facial erythema (redness) associated with rosacea. Rosacea is a skin disorder that typically affects adults over the age of 30 and it causes facial redness on the nose, cheeks, chin, and forehead. In some cases, rosacea may also present with pimples in the same areas. The facial redness is caused by blood vessels dilating in the face. The active ingredient in Rhofade is oxymetazoline which is an alpha adrenoceptor agonist. Alpha adrenoreceptors are located throughout the body on blood vessels and they cause vasoconstriction (narrowing of blood vessels) when they are stimulated. Narrowing of blood vessels reduces blood flow which reduces redness. Since Rhofade is a topical cream, it acts locally where it is applied without impacting blood vessels that are not located in the face.

What is Rhofade used for treating?

Rhofade is used for treating rosacea, which is a skin disorder that involves redness of the nose, cheeks chin, and/or forehead. In some cases, it may also include pimples or bumps on the face.

Rhofade reduced facial redness associated with rosacea over 12 hours with a once-daily application in 2 clinical trials,.

The primary endpoint was evaluated on day 29 and was defined as the proportion of the patient’s face with at least a 2-grade reduction in erythema from baseline using the clinician erythema assessment (CEA) and subject self-assessment (SSA). The endpoint was measured after 3, 6, 9 and 12 hours and results were compared with that of the vehicle (Rhofade without active ingredient). CEA and SSA were also measured on Day 1 and 15 at the same time intervals for comparison. At least twice as any Rhofade treated patients achieved the primary endpoint when compared to the group that received the vehicle. Rhofade was more effective than the vehicle at reducing facial erythema associated with rosacea

What are side effects of Rhofade?

What is the dosage of Rhofade?

A pea-sized amount of Rhofade cream should be applied topically to the face (forehead, nose, each cheek, and chin) once daily in a thin layer. Avoid the eyes and mouth. Priming the pump is required upon initial use and whatever amount of medication is dispensed in the first 3 pumps should be discarded.

Which drugs interact with Rhofade?

Rhofade can affect blood pressure because it causes vasoconstriction. Since Rhofade is applied topically and therefore acts locally, the chance of it affecting blood pressure is not as high. However, some medication is still absorbed into the blood stream, therefore caution should still be used, especially if the patient is taking antihypertensives, beta-blockers, and/or digoxin.

MAO inhibitors affect the breakdown of many drugs and may increase the risk if high blood pressure when they are combined with oxymetazoline.

What are warnings and precautions for Rhofade?

The use of Rhofade during pregnancy has not been studied. However, there were no adverse developmental effects when oxymetazoline was given to animals.

There is no information on the quantity and/or rate of Rhofade excretion in human breast milk.  However, animal studies showed that oxymetazoline was detected in the milk of lactating rats. The health benefits of breastfeeding should be considered along with the mother’s need for Rhofade before starting the medication.

What is the cost of Rhofade?

Rhofade will be available to the public in May of 2017. The cost of Rhofade is not available.