Applying for college can be a confusing and scary time. Here are some tips for making that process a bit easier.

1. Take Both the SAT and ACT

While the thought of getting up to take an 8 am test on a Saturday is distasteful to most people, it is unfortunately necessary when applying to college. While most people are well aware of the existence of the SAT, fewer know about the ACT. The ACT is an alternate college admissions exam accepted by a large number of schools. There are a few differences between the tests. One difference is that the ACT has a science section in it. Another is that unlike the SAT where you alternate between a total of 9 writing, reading and math sections, the ACT presents the entirety of each section at once. The reason you should take both tests is because some people do significantly better on the ACT than the SAT, and this higher score can help you get into a better college.

2. Be Familiar With SAT II’s

While many people are familiar with the SAT’s, it is important to remember that there are also SAT II’s. These are separate, single subject sections that test areas of knowledge not covered on the actual SAT. There are three reasons to take SAT II’s. One is that certain colleges, particularly top universities, require people to take them in order to gain admission. Another reason is that certain colleges will let you submit a few SAT II subject tests in place of the traditional SAT or ACT. Additionally, a high SAT II test score in a subject area that applies to your desired major can look very good to colleges showing that you are a dedicated and able student. 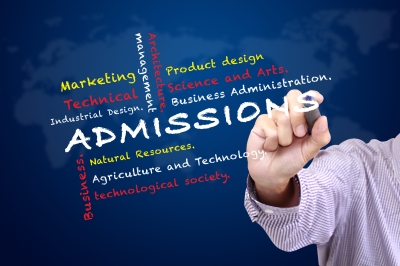 For many people, college application will be the first time they ever have to get a letter of recommendation. Now obviously, you should only ask teachers who you get along with to write the letters. However, be wary of simply choosing a person just because they like you. You might have a fantastic relationship with your wood shop teacher, but if you’re applying to become a foreign language major, the recommendation might not carry much weight. A good rule of thumb is to choose teachers whose subjects relate to what you are applying to in college. If you are really stumped, English teachers can be asked for nearly any major since no matter what you do in life, basic communication skills are very important. One should also be wary of asking teachers you only had freshman year for recommendations. Colleges want to know who you are now, not who you were three years ago so try to use teachers who you have had more recently.

In order to have a better chance of getting in to their top choice, many students are tempted to seek either early action or early decision. The main difference between these two programs is that early action is non-binding where as early decision is binding (you have to go to that college). The result is that while early decision usually gives the students a better chance at getting in to the school, early action might actually hurt a student’s odds. This is because colleges are hesitant to admit more than a certain percentage of students via early action, and if a large number apply, it can harm your admissions chances. Also important to note is that if you opt to seek early decision, many colleges will no longer be able to add you to a waiting list. They may defer you to the regular decision pool but if you do not make that cut, you will be flat out rejected. Therefore before deciding on whether to use early decision, early application or regular admissions to a college, you should always make sure to check the percentage accepted from each pool first.

5. Be Realistic About Your Options

Unfortunately, college admissions get more competitive every year. This has resulted in colleges having record low admissions rates. Even if you think you have the correct grades for a certain school, you may still be rejected simply because too many qualified students also applied. As a result, the safety school has become more important than ever before. This does not mean that you shouldn’t try to get in to your ideal schools. It just means that you should be careful and have several back up plans in case you do not get in.