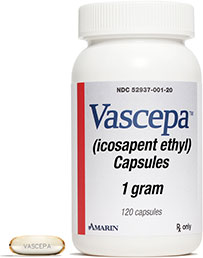 What is Vascepa and how does it work

What does Vascepa treat

How effective is Vascepa

When Vascepa was studied in adults with severely high triglyceride levels, patients treated with Vascepa saw a reduction in the following markers of “bad cholesterol” when compared to individuals that did not receive Vascepa:

The reduction in triglycerides seen with Vascepa was not associated with increased LDL-C, which is a key indicator of “bad cholesterol” in the blood.

The effect of Vascepa on the risk of pancreatitis in patients with severely high triglyceride levels has not been determined.

The effect of Vascepa on heart problems in patients with severely high triglyceride levels has not been determined.

What are interesting facts about Vascepa

What are the side effects of Vascepa

Patients allergic to fish oil should use Vascepa with caution

How is Vascepa dosed and administered

Vascepa should be taken as two 1 gram capsules twice daily with food (4 grams per day).

What are Vascepa drug interactions

Vascepa was studied with warfarin, atorvastatin, rosiglitazone and omeprazole, which share a similar elimination pathway, and no significant drug interactions were seen.

Omega-3 fatty acids may increase the time it takes for blood to clot, increasing the risk of bleeding. Patients treated with Vascepa who are also taking a medication that increases bleeding should be monitored periodically.

What is the cost of Vascepa

The price of Vascepa 1 gram capsules is between $211 to $264 dollars for 120 capsules. Save on Vascepa prescriptions cost by signing up for the Vascepa Savings Card. Discount coupons are also available form many pharmacies.