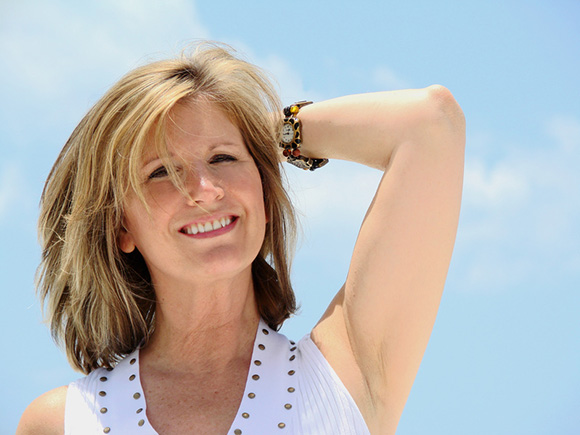 Menopause is defined as when a woman stops having her period for 12 consecutive months. On average menopause starts at age 51, however, the age of onset ranges from 45 to 55 years. Since menopausal symptoms can last for several years, it is very bothersome for many women. The most common symptoms of menopause include hot flashes, night sweats, vaginal dryness, mood changes, and sleep problems. Although estrogen and progesterone are very effective for relieving symptoms of menopause, some women cannot take them or choose not to take for various reasons. Women who have severe liver disease, history of blood clot, or history of breast cancer are not good candidates for hormonal therapy. Therefore, many women are looking for alternatives to hormonal therapy for reducing menopausal symptoms.

Black cohosh is one of the best-selling herbs for the symptoms of menopause. It is called black because the roots of the black cohosh plant are used medicinally and are very dark. Black cohosh may have some effects similar to estrogen. The recommended dosage of black cohosh tablets or capsules is 20 to 40 mg once or twice daily.

Remifemin is the most studied brand of black cohosh. One study evaluating black cohosh use found a significant reduction in symptoms of menopause at the end of 12 weeks. Another study comparing two different doses of black cohosh found the two doses provide the same level of symptom relief. However, these two studies did not include placebo for comparison.

There have been some cases of liver toxicity associated with black cohosh. People with existing liver disease or use alcohol or other medications that affect the liver should avoid black cohosh. The North America Menopause Society recommends a trial of black cohosh for 6 months or less because of the lack of long-term safety studies.

Phytoestrogens are commonly found in many different plants including fruits, vegetables, and legumes. Phytoestrogen supplements obtained mainly from soy and red clover have been used for menopause symptoms. Soy products have large amounts of isoflavones which are the most potent and most common phytoestrogens used in supplements. Isoflavones may be helpful in reducing hot flashes caused by menopause. Approximately 50 to 80 mg of isoflavones is the amount commonly used to prevent symptoms of menopause.

The reported benefits of phytoestrogens are based on observational studies of diets in different parts of the world. Researchers noticed that only about 10% of Asian women experience hot flashes and presumed that Asian women are less likely to have hot flashes because Asian diets contain more soy protein than North America diet.

Not all clinical trials of soy showed good outcomes. Several studies found no difference between phytoestrogen treatment and placebo in reducing symptoms of menopause.

Red clover is another source of isoflavones. In a trial of 252 women experiencing at least 35 hot flashes per week, red clover supplements were not better than placebo for relief of hot flashes. Large, long-term studies are needed to further document the effects of phytoestrogens before phytoestrogens can be considered an alternative to conventional hormone therapy in postmenopausal women.

Evening Primrose Oil is derived from evening primrose seeds and widely used to relieve hot flashes. However, available data suggests that it is not useful for treatment of menopausal symptoms.

Wild yam is often applied to the skin in the form of a cream to relieve hot flashes and night sweats. However, there is no available scientific evidence that suggests that it is safe and effective. Wild yam is well-tolerated, but large amounts can cause vomiting. Further research is needed to better define the role of wild yam in reducing menopausal symptoms.

Chasteberry is a popular herb used by women. The dried ripe fruits or berries and the leaves are used for medicinal purposes. Users occasionally complain of stomach and intestinal side effects. Its other side effects include dry mouth, itching, acne, rashes, menstrual disorders, and headache. Chasteberry may contain progestin and estrogen in its fruit. There are some clinical trials supporting efficacy of chasteberry in improving symptoms associated with premenstrual syndrome. However, there is no evidence that it is effective for relieving menopausal symptoms.

Although these herbal products are the most commonly used for relieving menopausal symptoms, they should be used with caution since long-term safety and efficacy are not proven for these agents. Some herbs may interact with other medications. Inform your doctor and pharmacist before taking them. Keep in mind that these remedies should be used for a limited period of time. If a problem persists, you should get medical care right away.

Keenan NL, Mark S, Fugh-Berman A, et al. Severity of menopausal symptoms and use of both conventional and complementary/alternative therapies. Menopause 2003; 10:507.