In a society where sex is considered a very private matter, doctors are unlikely to bring up the topic of sexual health during an exam. In a recent study of men seeking treatment for erectile disorders, only 10% of the total sample reported being asked about possible sexual problems during previous routine general practitioner visits. Yet in this same sample group, more than three-quarters of respondents suggested that health professionals should routinely ask patients about their sexual performance (Gülpinar et. al 2012).

Though addressing sexuality is anxiety-inducing for many practitioners, it’s crucial to the overall health and wellbeing of our patients. Luckily, there’s an incredibly simple model for introducing conversations about sexual health in the exam room.

The PLISSIT model, developed in 1976 by Jack Annon, is a counseling model for sex therapy that can help practitioners of all stripes address sexual health in their patient encounters. It has 4 steps, which start with very broad information-seeking and narrow to specific referrals and interventions for a patient’s issue. 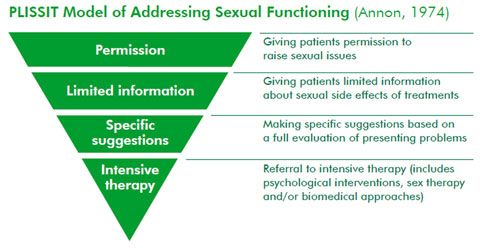 To show the PLISSIT model in action, we’ll use a case study.

Ms. Alexander is a 55-year-old cisgender woman. She’s 5’5” tall, 145 pounds, unmarried, and recently had a sub-total hysterectomy to remove fibroids from her uterus. Other than that, she has a clean bill of health and was quite active prior to the surgery. She came in for a general check-up and to follow up on her surgery, ensuring that she was healing properly.