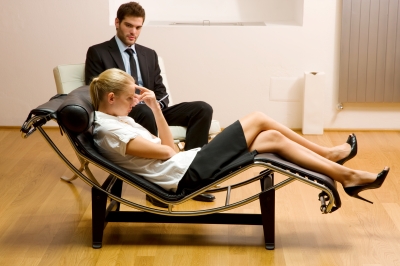 One of my friends is an internal medicine physician, has two small kids, and a spouse whom she hardly speaks to. She works 50 hours a week and takes call every three weeks. She comes home tired every night with enough energy to make dinner for her kids and bathe them. She tucks them in her bed while her husband sleeps in the guest room. Last month, she declared that she was getting a divorce. I begged her to see a marriage counselor or therapist before choosing a divorce lawyer. She replied, “I’m a doctor. I don’t need therapy. It will not work for me.” How can brilliant minds like doctors easily dismiss therapy?

It is ironic that while she may prescribe therapy for her patients, she will not succumb to therapy herself. It is well-known that smokers and depressed patients are more likely to succeed if therapy is involved. Separated couples are no different and many can reconcile with the help of therapy. My friend did not take my advice. So I did what a therapist would do. I called her every Friday. I asked about her week and she vented. After a while, I would summarize what I knew about her and told her my assessment. I knew that she was a workaholic and placed her children above her husband. I knew that she had a temper and was quite controlling. I knew that her husband was afraid of her and didn’t want to confront her. As a result, he ignored her. After two months of venting to me, she called me and said that she was no longer considering divorce. In matter of fact, they started going on “date nights” and taking family trips to the beach. She said that I brought a lot of insight into her relationship. It wasn't as bad as she thought. And it was salvageable.

Seeking therapy can be beneficial when you feel trapped or angry like during separation or when you feel confused like after a divorce. A few years after my divorce, I began dating. It was difficult. It was like riding a bike with a flat tire on a rocky terrain. I could do it but I had to ask for help and sometimes stop to push forward. After asking advice from my single girlfriends, I embarked on a new relationship. Within in a few months, I fell in love. However, I was terrified. The divorce rattled my sense of being. Everything I knew and did had a negative perspective. If I wanted to surprise him with a gift, I thought I was smothering him. If I wanted to hold his hand, I wondered if I was embarrassing him with public displays of affection. If I told him that I loved him would he think I was up to something sinister. This was a form of PTSD that I did not expect. For several years I thought I came out of the divorce unscathed. My ex-husband and I had joint legal and physical custody of our son and the relationship was amicable. I guess I was wrong.

One day, I had dinner with my girlfriend. She saw my tears and held my hand. She could not understand why I was scared of being myself in this new relationship. After a while, when we both realized that neither of us had an answer, she blurted out, “Maybe you should see a therapist.” Immediately, I replied, “What? I’m not crazy! I’m just confused about what to do.” I won’t lie; despite my knowledge, I chose to be handicapped by my own prejudice. The next day, I made an appointment with a therapist she recommended. For the next three months, one hour every Monday afternoon, I saw a therapist. It was the best money I ever spent on myself ($150 per hour).

She was a family therapist whose office was located on the first floor of her beach house. There was no brown leather couch, secretary at the front desk or even fake plants to set the mood. From the minute I walked in, the discussion was all about me. She said, “For the next hour, you can tell me everything or nothing. It is up to you. If you don’t tell me anything, I cannot help you. The fee is still the same.” Whoa. I better start talking. She began with a few questions. Every fifteen minutes, she would stop and summarize what she knew from my history. She wrote notes and even made diagrams so I could visually see what she was seeing. I was able to chime in and comment on her analysis. My therapist gave me insight about me that no one else could enlighten me on, including my girlfriends. Then she offered solutions to my problems (apparently, there was more than one).

Ten years later, I feel 100 times happier and still remember what I learned from those sessions. I highly recommend therapy to anyone who remains stagnant in their relationships or to those who have difficulty moving forward in their lives (i.e. divorced, widowed, dissolved relationship, job displacement, depressed). Remember, we are not born with the ability and knowledge to handle all of life’s lemons. Sometimes, we resort to our family and friends for advice. What happens when they don’t know what to do? See a therapist. If you earn over $100,000 a year, you can surely spend $150 on your mental health and be illuminated.

Here are a few lessons that I learned from my therapy sessions:

Did you know that every relationship requires effort? Over time, couples tend to neglect their relationship. It is unfortunate to know that no matter how bad of a mood you are in, you are likely to be nicer to your boss and coworkers than to your own spouse.

Did you know that arguments are normal in every relationship? However, the topic of the argument should not be exactly the same every time. Arguments don’t necessarily end with an apology each time; it should end with a resolution to move forward. If you are still fighting over their binge drinking for the umpteenth time, then it is obvious that nothing was solved from the previous fight.

Did you know that you cannot change the past? Many times we are wasting countless hours, reflecting on our history and trying to justify our mistakes. What is done is done.

Did you know that it takes “two to tango”? In most relationships, it takes two people to fall in love, get married, neglect each other, change their priorities, fall out of love, and file for divorce.

Did you know that when you buy him a gift that you are really buying a gift for yourself? I used to buy fancy button-down shirts with matching silk ties for my boyfriend. I thought he looked debonair and sophisticated. Apparently, he did not like wearing these clothes and yet I still bought them. He wore scrubs to work and I still kept buying clothes. After therapy, I started to buy video games and paintings for his house. I did not know what I was buying (salespeople are so helpful) but he loved everything I bought.

These lessons are not new or based on recent studies. On some level, you already know them. I just hope that you are doing them too. If you don’t know them, consider seeing a therapist for clarity and enlightenment. If seeing a therapist can save your relationship and make you and your family happier, isn’t it worth it?